Dive operators Regions Dive seasons Best diving Cost of diving Marine life
The island nation of Indonesia is known for its vibrant soft corals, swirling marine life, and nutrient-rich currents that make each dive more exhilarating than the last. Experienced divers travel far and wide for the chance to spot rare pelagics, while those who have never dived before can have their first experience on one of the world’s most famous wreck dives. Regardless of your skill or experience, diving Indonesia should be at the top of any passionate diver’s must-see list.
With thousands of fish species and hundreds of different coral varieties, Indonesia aims to please and rarely does it miss.

Why go diving in Indonesia?

With so many convincing reasons to dive in Indonesia, the better question is really “why not”?
Thrilling dive sites – With thriving marine life and healthy corals, many of Indonesia’s dive sites are considered world-class. The diversity of the sites ranges from heart-pumping drift dives, vertigo-inducing walls, shallow reefs, and breathtaking wrecks.
Rich marine life – Indonesian waters shelter 20% of the world’s coral reefs and thousands of marine life species. Raja Ampat – a particularly impressive island series – was recorded to have the highest marine life diversity ever discovered on the planet.
Affordable – Like much of Southeast Asia, the cost of diving in Indonesia is a fraction of what it costs in the Western world.
Temperate – Year-round tropical waters (between 24 C to 29 C) and even warmer air temperatures make Indonesia a comfortable location both on and under the surface.

Is it easy to arrange diving?

It’s very easy to arrange a dive holiday in Indonesia. Most shops take reservations via email in addition to welcoming walk-ins. If there’s space on the boat, they’ll schedule you in.

Is it mainly liveaboards or day trips?

It’s a healthy mix of both. Bali, Lembeh, and Pulau Weh are most commonly dived from the shore or with a short boat trip. Bigger areas like Komodo and Raja Ampat can be explored either by day trip or a longer liveaboard. Liveaboard diving in Indonesia depends on the diver’s budget, time schedule, and occasionally the experience level.

The best operators in: Indonesia 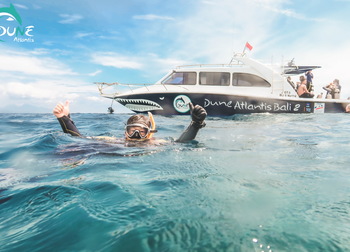 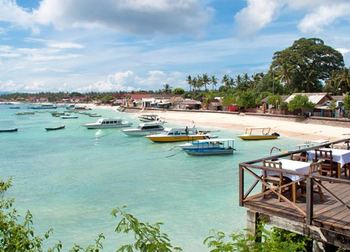 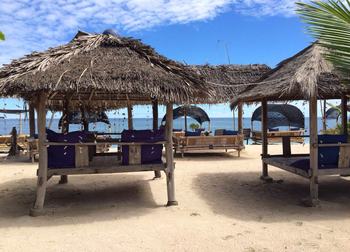 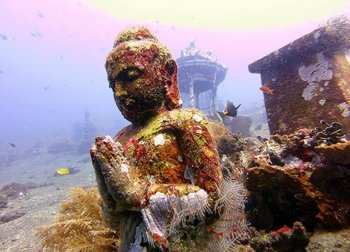 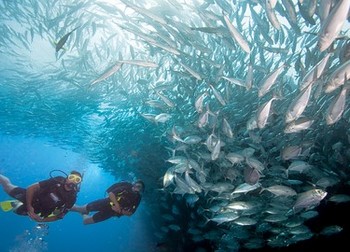 Be the first to review!Region: Bunaken

This is like asking parents to pick their favorite child. It’s impossible! Each dive destination in Indonesia attracts differ types of divers hoping to experience different things. Photographers will love Lembeh while Raja Ampat will spoil most divers for the rest of their life. Bali offers an array of sites for beginners through professionals and the currents of Komodo and Bandeh Aceh reward advanced divers with a heavy dose of adrenaline and marine life.

Bali
Bali diving is suitable for beginners while simultaneously satisfying the experienced. Claiming the U.S.S. Liberty wreck(one of the best dive sites in Indonesia), unique black sand bottoms, and vibrant soft corals, Tulamben diving is particularly rewarding. In general, Bali provides a mash-up of macro-life and open water giants. Depending on the dive site, you have a chance to spot scorpionfish, bluefin trevally, tuna, snappers, triggerfish, eels, humphead parrot fish, snake eels, and some eye-popping nudibranch. Head over to the neighboring island and dive Nusa Lembongan and up your chances for spotting the elusive Mola Mola (Sunfish) if the time is right.
Bali Bonus: many of Bali’s dive sites are shore dives, or just a quick 5-minute boat ride away. Having some of the world’s best sites mere steps off the volcanic-sand beach is an incredible convenience not found anywhere else.

Gili Islands (Lombok)
These three islands – Gili Air, Gili Trawangan (Gili T for short) and Gili Meno all over diving. Thanks to a well-functioning conservation program, Gili Island diving means your chances of encountering turtles are high. It’s also considered a good place for beginners and inexperienced divers since conditions are usually calm and there are many “easy” dive sites. Divers should be aware that in certain areas there is extensive coral reef damage to the shallower reefs due to dynamite fishing. Reef sharks, giant turtles, rays, barracudas, bannerfish, huge barrel sponges and gorgonian fans can be seen here. There’s also a healthy dose of macro-critters.

Raja Ampat (West Papua)
Experienced divers who like to differentiate marine life and corals will be blown away by everything Raja Ampat has to offer. Sharks, whale sharks and mantas cruise the waters as do humphead parrotfish, groupers, batfish, and barracuda. Trevallies and tuna swirl so thick that you’ll momentarily lose your buddy. It’s also common to see hundreds of schooling bannerfish and fusiliers. Don’t forget to look down once and while to spot a hidden pygmy seahorse. After Raja Ampat, many other dive spots will pale in comparison.

Lembeh (Sulawesi)
Photography enthusiasts should book it straight to Lembeh, the Macro-creature capital of the Indonesian dive world. The mucky bottoms of the Lembeh Strait create an ideal environment for a host of spectacular critters such as the mimic octopus, flamboyant cuttlefish, harlequin shrimp and countless nudibranch.

Pulau Weh (Sumatra)
This small island set at the tip of northern Sumatra is the jumping off point for some deeply thrilling dives. More suited for the advanced – although still possible for training courses and beginner divers – the most northwestern island in Indonesia boasts world class diving without the crowds. Not yet common knowledge, Pulau Weh serves as your secluded island paradise and diving hot-spot. Deep wrecks, gentle drifts, tiny creatures and giant pelagics ensure no dive is like the one that came before it. Expect to see different shark species, turtles, frogfish, and devil rays. Whale sharks and mantas are also a possibility.

You can dive at any time of year in Indonesia. However, because the country is so large and spread out, peak diving seasons vary from place to place. Below you will find the high and low dive seasons for Indonesia’s most popular locations:

Bali (including nearby Nusa Penida and Nusa Lembongan)
High season:  April – July, October and November for spectacular visibility and conditions.
Low season: December– March is rainy season, but diving is definitely still on. You may experience reduced visibility around this time.
Gili Islands
High season: Year-round, but May - September are considered the best.
Low season: The visibility drops during the rainiest months of December and January.
Raja Ampat
High season: October – April are the most popular months for liveaboard excursions from the port of Sorong, however day trips leaving from the few resorts on Raja Ampat run all year-round.
Low season: Rough seas and rain are common between July – September.
Komodo
High season: Komodo boasts top-notch conditions year-round and liveaboards are running here all 12 months. Dry season runs from April – November, however the best visibility usually falls between November – January. But keep in mind, the lower visibility months of July and August promise to deliver blooming marine life thanks to the nutrient-rich current that sweep through around this time. Diving is always a compromise!
Low season: November – March is rainy season, but scuba diving in Komodo always prevails.
Lembeh Strait
High season: The cooler months of July and August make the best months for spotting marine life. The best visibility months are October, November, and December.
Low season: The rainy season months of January and February sometimes make northern dive sites inaccessible. June – September can see choppy surface conditions; however, all months are dive-able in Lembeh.

Cost of diving in Indonesia

In general, world class diving in Indonesia is not going to break the bank. The cost varies depending on whether you are looking to take a certification course or you’re a certified diver ready to book some fun dives. Check out the average prices below.

Indonesia Scuba Diving Courses
If you want to get certified, the Open Water Diver Course will cost you around $300 - $350 USD and can usually be completed over 3-4 days. Advanced Diver is typically set between $250 - $300 and the Rescue Diver course around $300. If you’re thinking about going pro, Dive Master courses are typically around $850, materials and additional fees excluded.

Fun/Adventure dives
These kinds of dives can only be booked by certified divers. Expect to pay around $50 per dive, equipment and boat transport included. The price per dive is usually cheaper when you book multiple dives in one day or a dive package. Keep in mind you may have to pay additional fees if you’re diving in a marine park.
Liveaboard
This is one of the most popular ways to see a comprehensive selection of Indonesian dive sites, especially when diving around Raja Ampat and Komodo. Sorong in West Papua is used as a jumping off point for liveaboards touring Raja Ampat. They run the gamut to hard-core 11-night, 38-dive trips on luxury boats for nearly $6,000 USD to more basic 10-day trips on smaller vessels for under $4,000. Liveaboards around Komodo start at $155 USD/day and extend to roughly $350 USD, making it a slightly cheaper option when compared to Raja Ampat.

Indonesia supplies the diving world with creatures of all shapes, sizes, and colors. From deep water dwellers, to sandy bottom feeders, to playful current-loving pelagics, Indonesia has nearly got it all:
Booking.com
© Copyright Surface Interval