Dive operators Regions Dive seasons Best diving Cost of diving Marine life
It is human nature to ignore what is in their own backyards. Tourist will spend hundreds even thousands of dollars to visit a destination that the locals do not even visit themselves. Spain is one of the leading tourist destinations in Europe. Still, divers often overlook Spain for trips to other destinations. One of the reasons may well be the popularity of Spain as a tourist destination. The variety and quality of the diving gets a little lost in all the hype of the different adventures that wait those traveling there for a sunny getaway. When northern Europe is cold and dreary, the coasts of Spain are warm and inviting.


Those divers who explore their “backyard” will find that Spain offers outstanding diving and can cater to divers with vastly different expectations. Diving Spain is like the old commercial about the mint that is both a breath mint and a candy mint, Spain is a dive destination that is both a cold water and a warm water destination. Divers can find both types of diving year round. There is diving for experienced divers and for those just learning.


Europe has a well establish transportation system that integrates air travel as well as buses and trains. The road networks allow you to travel across the continent with few worries. Getting to any of the dive destinations is simply planning.

The best operators in: Spain

Be the first to review!Region: Costa Blanca

Be the first to review!Region: Tenerife (ES) 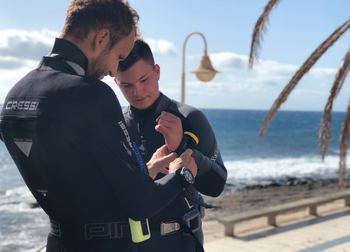 Be the first to review!Region: Canary islands

Be the first to review!Region: Tenerife (ES)

Be the first to review!Region: Costa de Almería

Be the first to review!Region: Ibiza 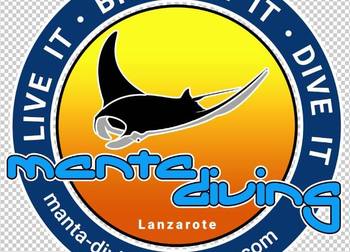 Be the first to review!Region: Canary islands 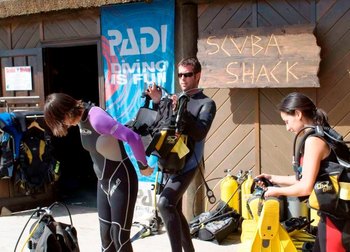 Be the first to review!Region: Costa del Sol

Be the first to review!Region: Costa Brava

The long coast line of Spain on both the Atlantic Ocean and the Mediterranean Sea as well as the islands that are part of the country gives divers almost unlimited options. There are really hundreds of places where you could head to for diving but for explanations it would be best to group these destinations into some broad destinations.


·         The Canary Islands present some of the best open ocean diving in the Atlantic Ocean. The Canaries are located about 100 kilometers off the coast of Africa and receive about 12 million tourists per year. The islands have a subtropical climate, with long hot summers and moderately warm winters. Diving is excellent year round. Visibility greater than 30 meters/100 feet is common, and water temperatures never drop below 17-18° C/63-64°F.  Marine life is abundant and feature species found in the Atlantic Ocean as well as those that are from the Mediterranean Sea. Rays, Whales and Dolphins are found year round. The seven main islands, Tenerife, Fuerteventura, Gran Canaria, Lanzarote, La Palma, La Gomera and El Hierro, are the tops of a volcanic mountain range. A dozen smaller islands and islets are also considered part of the islands.


·         The Balearic Islands is an archipelago in western Mediterranean Sea, near the eastern coast of the Iberian Peninsula. The islands are a popular year round tourist destination and diving is possible year round as well. The four largest islands, Mallorca, Menorca, Ibiza, and Formentera each have a different “personality” and attract different markets.  The Balearic Islands have over 80 dive sites. The winter months cool the water some but not to the level that requires a dry suit. Visibility of 30 meters/100 feet is the norm. There are some liveaboards in this area and you can find yacht charters that will support scuba diving.


·         Costa del Sol, translates to Coast of the Sun which sums up nicely this part of Spain. Costa del Sol is a 200 kilometer stretch of coastline centered on the Mediterranean city of Malaga. The coast line is rocky in many areas and the area is rich in shipwrecks and marine life. This portion of the Med is narrow and seems to concentrate the marine life. Dolphins and whales making their way to the Atlantic Ocean are often found here. The warm water allows great year-round diving conditions that may be subject to currents.


·         The Costa Brava is the northern Mediterranean coastline.  It represents 260 kilometers of rocky coves, quaint villages, sandy beaches, and mountain scenery. The area includes three marine reserves. The water temperatures here vary more than most Spanish locations and many of the dive centers are only open during the summer months. Those who dive off season consider it a temperate water dive. Barcelona is the main entry point to this area.


The Bay of Biscay is a vastly different animal then the rest of diving in Spain. The Bay of Biscay offers outstanding cold water diving for a short summer season. The Bay is a portion of the Celtic Sea and shared by Spain and France. The bay is noted as having some of the most unpredictable weather of any marine location. During the winter months, the storms are a danger to shipping. The summer season is more predictable and generally there is enough notice to avoid bad weather.  The summer also sees a large population of basking sharks and other large marine life. The underwater landscape is breath taking. This is a location primarily for experienced divers used to cold water diving, however there are coves that are protected that may be dived by less experienced divers.

Spain is considered a year round dive destination. The Canary Islands and Costa del Sol offer outstanding warm water diving year round. The Balearic Islands are also great year round with a little more protection during the cooler months. Costa Brava is mostly a peak season destination.  The Bay of Biscay has a limited summer dive season.

Cost of diving in Spain

Spain is a popular tourism destination. It has a wide range of accommodations from basic backpackers to luxury five star. Cost varies by location, however, expect to pay around €80 for a two dive package with your own equipment. An Open Water Diver course will be around €400 plus course material.

Spain is fortunate to have a healthy marine population. The Mediterranean destinations have a nice variety of reef fish and you will often see whales, sharks and dolphins. The Canary Islands will have the same species as you will see in the Med plus marine life normally fond in the Atlantic Ocean.
Booking.com
© Copyright Surface Interval